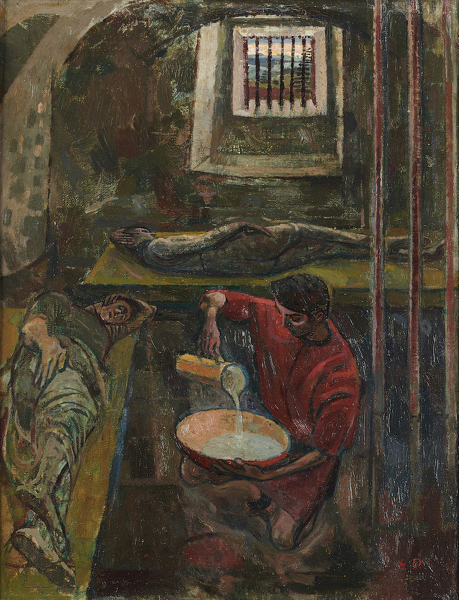 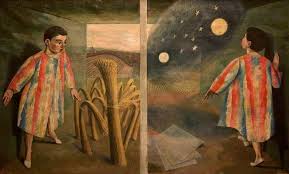 Dunbar sold Joseph in Prison to a Mr L F Herbert (the name scrawled on the verso), who lent it back to Dunbar for the only solo exhibition of her career, at Withersdane, Wye (Kent) in December 1953. The “4. Joseph in Prison” on the frame may have been cut from the exhibition programme.

The central figure in red is Joseph himself, and he bears some resemblances to the Joseph in the Dream and the Pit. His famous coat of many colours was stolen from him by his brothers, but clearly he still has a liking for colourful clothing. Seen from above in quarter-profile, he also strongly resembles Dunbar’s husband Roger Folley, a horticultural economist then working in Oxford University. Genesis 40: 1-7 tells how Joseph, then in Egypt falsely accused of rape, was thrown into the captain of the guard’s prison. He was later joined by Pharaoh’s butler and baker – the two recumbent figures in the painting – and because he had proved himself to be an able and reliable person, a “trusty” as one might say, the guard captain put him in charge of the butler and baker. Dunbar shows him serving them with sheep’s milk or something similar. She pinpoints the very day: it’s morning (the dawn sky through the window), Joseph comes into their cell and observes that they are sad. He asks why: they tell him they’ve had disturbing dreams, and the correct interpretation of these dreams is what enables Joseph’s eventual release. Joseph is equated with providing for mankind, something very important in Dunbar’s canon of beliefs and as a devout Christian Scientist. Later in the story he provides for his entire famine-stricken family, symbolising the Jewish nation. Dunbar sometimes casts the same mantle of provider on her husband Roger Folley in the context of his profession. 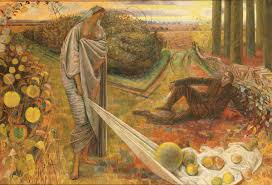