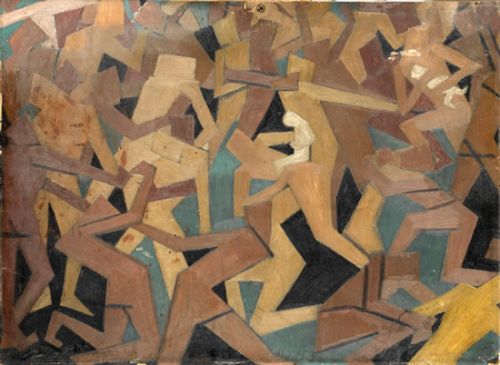 “Untitled Figure Study” was probably executed during Clare Winsten’s final year at the Slade School of Fine Art and demonstrates her awareness of and engagement with European Modernism. As in an earlier work, Attack (c.1910, Ben Uri Collection), two of the figures clutch babies and the subject, possibly a reworking of a biblical or classical composition set for competition at the Slade, may be based on either the massacre of the innocents or the rape of the Sabine women. Winsten reworked the motif of severely simplified, actively engaged or struggling figures in several increasingly complex contemporaneous works, c.1910-12, employing a variety of media and palettes. This composition, one of her most taut and controlled, shows her moving towards the flattened, hard-edged figuration of the emerging Vorticists, with whom her work shares both a dynamism and a certain stasis. It also relates closely to similar compositions within the work of her Slade contemporary and Whitechapel neighbour David Bomberg, whose subject matter was then, however, rooted in secular, Jewish East End life. Certainly, for a period the two artists worked along similar lines, and Bomberg included two of Winsten’s studies in the so-called ‘Jewish Section’ in a larger review of modern movements at the Whitechapel Art Gallery in 1914. However, Winsten also showed a more experimental work independently, outside this section, alongside other female artists, including the Vorticist Helen Saunders.

Commentary by Sarah MacDougall, Eva Frankfurther Research and Curatorial Fellow for the Study of Émigré Artists and Head of Collections at Ben Uri Gallery and Museum, specialising in the immigrant contribution to British visual culture since 1900.