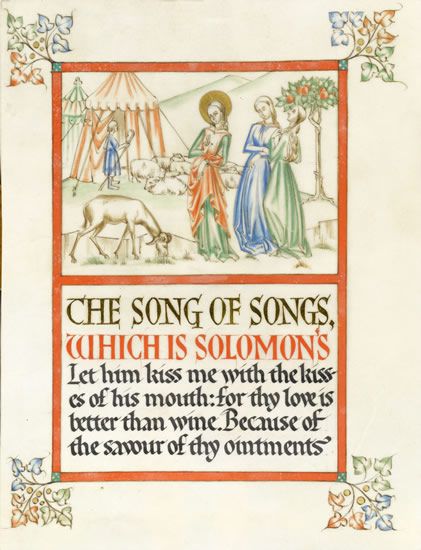 Dorothy Mahoney (ne Bishop) entered the RCA School of Design in 1924 with Book Illustration as her principal subject.  From 1926-28 she took lettering and illumination as her principal subject under Edward Johnston, to whom, during this period, she became student-assistant.  Her subsidiary subjects were wood engraving, pottery, bookbinding and embroidery.
In 1929 she was appointed Deputy Assistant to Edward Johnston, giving lectures, demonstrations, and classes in his absence.

A small selection of her work is on display at The British Museum.
This page is copied from the English 14th century Queen Mary Psalter, probably in the later half of the 1920's whilst still at the RCA.  The original was in the British Museum but the a fine facsimile copy made in 1912 was held in the Victoria and Albert Museum next the Royal College of Art.  These examples of DM's early work show how her ability as a scribe was enhanced by her love of decoration.  Elizabeth Bulkeley, the artist's daughter, ( note to Paul Liss December 2010).