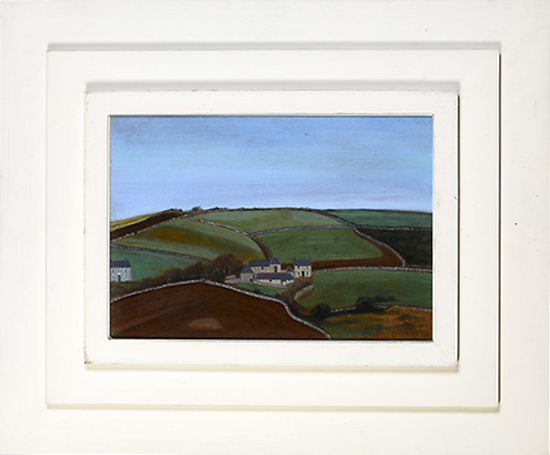 The artist Gluck was the daughter of Joseph Gluckstein, one of the founders Jo.Lyons & Co of Corner House fame, and the American singer Francesca Halle.   Refusing to follow family conventions she insisted on becoming an artist and in 1916 she made her first visit to Lamorna in Cornwall where she met Alfred Munnings, Harold and Laura Knight and Dod and Ernest Proctor, later, in the 1920s, buying the Knights' studio.   Returning to London she was befriended by Gordon Selfridge who gave her a studio in his store where she painted 'one-sitting' portraits.   She had her first solo exhibition in 1924 at the Dorien Leigh Gallery, owned by the renowned photographer E.O. Hoppé, whose iconic photographs of her with cropped hair, smoking a cheroot and dressed in a Saville Row suit appeared in many magazines (one was included in the recent Hoppé exhibition at the National Portrait Gallery).

Gluck became a quintessential Art Deco figure with major exhibitions at The Fine Art Society in the 1920s and 30s, designing her own frames - and even the gallery on one occasion - working closely with Constance Fry, one of her many famous lovers, and the architect Oliver Hill.   During the 1930s she shared a studio in Cheslea with the American painter Romaine Brooks, but towards the end of the decade she gave up painting and devoted her time and formidable energy to fighting a battle with all the paint manufacturing companies of the world, claiming they were altering the composition of artists' materials.   Feeling vindicated she returned to painting and her 1973 exhibition at the Fine Art Society was a triumph, being hailed by critics, museum curators and collectors, and firmly re-establishing her reputation as one of the major figures of her period.
We are grateful to Peyton Skipwith for assistance.