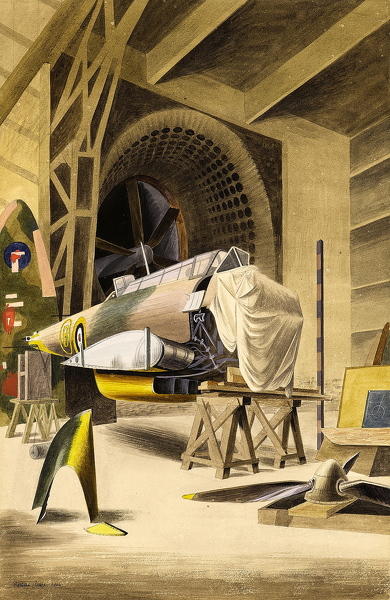 This composition is closely related to one of Jones Recording Britain watercolours in the collection of the V&A.

And another watercolour in the collection of RAF Hendon: 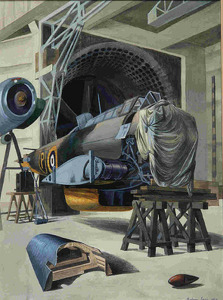 There is no record of how Jones, still in her twenties, became involved in the Recording Britain Scheme but she was one of the first artist's to be commissioned and its most prolific contributor.

Recording Britain was the brainchild of Sir Kenneth Clark, who saw it as an extension of the Official War Artist scheme. By choosing watercolour painting as the medium of record, Clark hoped that the scheme would also help to preserve this characteristic English art form.

Recording Britain was intended to boost national morale by celebrating the country’s natural beauty and architectural heritage, but it was also a memorial to the war effort itself. The earliest pictures show the landscapes of southern England which were under immediate threat from bomb damage and invasion; in due course the remit was expanded to include those landscapes, buildings and ways of life that were vulnerable to the destructive forces of ‘progress’ – urban expansion, housing developments, road-building and so on.

The scheme employed several women, notably Barbara Jones and Enid Marx. Both were fascinated by English popular art – everything from fairgrounds and follies to topiary and inn signs – and both continued to record these 'unsophisticated arts' after the war.

Works for Recording Britain, which numbered over 1500 watercolours, were widely exhibited during the war years.  In 1949 the Pilgrim Trust gave them to the V&A.