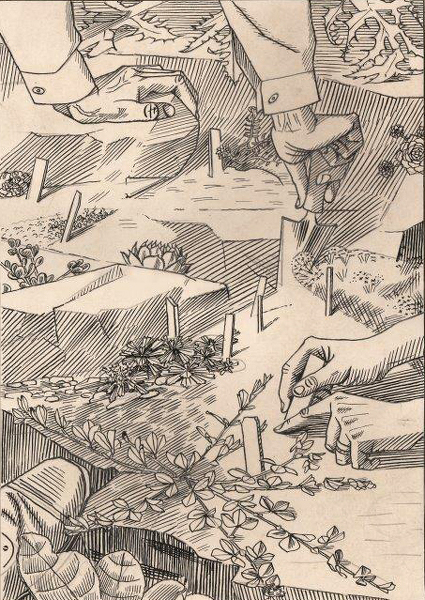 
Coronilla cappadocia is a vetch that flowers all through the summer – typical of the then unfashionable plants that Mahoney and Dunbar championed in their book Gardeners’ Choice, published 1937.
Exhibited: Evelyn Dunbar - The Lost Works, Pallant House Gallery, October 2015 - February 2016, cat 59.
Literature: Evelyn Dunbar - The Lost Works, Sacha Llewellyn & Paul Liss, July 2015, cat. 59, page 99.
The upper hands and shoes can be taken to be Charles Mahoney’s, the hands on the right with wedding ring to be Dunbar’s, who until their relationship broke up in 1937/38 thought seriously of marriage to him.
Gardener’s Diary 1938 & Related Paintings
"Noel Carrington, Dunbar’s Hampstead landlord, was keen to promote the work of those artists he admired. In 1937 as editor at Country Life Ltd. – a separate publishing entity from the eponymous magazine – he commissioned Ravilious to illustrate The Country Life Cookery Book and Edward Bawden The Gardener’s Diary. These were followed in 1938 by High Street, again illustrated by Ravilious, with text by J.M. Richards, and a further Gardener’s Diary illustrated by Evelyn Dunbar. Although the two diaries are similar in format they are very different in content – the 1937 one has a running frieze of flowers and plants along the top of each weekly double page, balanced at the bottom by quotes from William Cobbett’s English Gardener of 1827: within each week the Diary provided upright columns for daily entries and notes, while a considerable space was allowed for comments on the weather.
Bawden’s end-papers depicted a cut rose in a vase with his own half-drawn sketch pinned neatly to the drawing board beside it.
For 1938 the brief must have changed quite radically, perhaps in response to comments
received on the previous year’s production, as the emphasis changed from the
depiction of individual plants to the physical attributes of gardeners and gardening,
with quotes ranging from the Book of Job to authors as varied as Charles Lamb and
Thomas Hardy. The decision to depict the months through the personification of their
attributes was probably a joint decision between Dunbar and Carrington, but chimes
with the otherworldly quality she had exploited so successfully at Brockley in her mural
The Country Girl and the Pail of Milk. Bawden’s running frieze of plants and flowers at
the top of each page was replaced by discreet depictions of fruits and seeds in the top
right-hand corner while Dunbar’s tailpieces consisted of simple outline depictions of
gardeners – male and female. There were only a dozen vignettes of these toiling figures and the delightful sheet of studies (CAT 60) shows several of them in embryonic form, most particularly the rear view of one of the Dunbar’s gardeners bent double with rake or hoe in hand.
This figure makes five appearances in all, being repeated as the tailpiece to various weeks in January, March, April, May and December. Apart from the figure
of a weary gardener carrying two full watering cans, who appears just twice – in June
and July – there is little correlation between the seasons and the activity depicted;
Dunbar took the opportunity through a studied awkwardness to emphasise the fact that
physical labour is the gardener’s lot throughout the year.
A lighter mood is reflected in her depictions of the months each of which takes human form: female in the gentler months – February (CAT 65) with crocus flowers and daffodil shoots in her hat, and April (CAT 69) jauntily wearing a bird’s-nest hat and carrying attributes of topiary and a garden frame.
August is definitely a male month with its abundance of cabbages and onions, as is November, the season for bonfires and general clearance. The figure of April – expressive of lightheartedness – became almost a leitmotif in her work recurring
in odd drawings and doodles, as well as in one of her most beautiful oil paintings.
Dunbar was not one to waste a good idea or design. These personifications of the
months also recur as the principal motifs in An English Calendar (CAT 71), the large
(6 foot square) decoration she painted the same year and later presented to Wye
College (on the closure of Wye in 2005 it passed into the collection of its parent body
Imperial College). Personation of the Seasons and the Virtues is deeply rooted in our
psyche from the Green Man of northern climes to classical sculptures of ancient Greece
and Rome. Dunbar delighted in personifying abstract conceptions returning to this
device in The Days of the Week (CAT 72) and in her projected Faith, Hope and Charity
(CAT 109) as well as transforming April into the heavily muffled figure in her wartime
painting Putting on Anti-Gas Protective Clothing (FIG 4)."
Peyton Skipwith