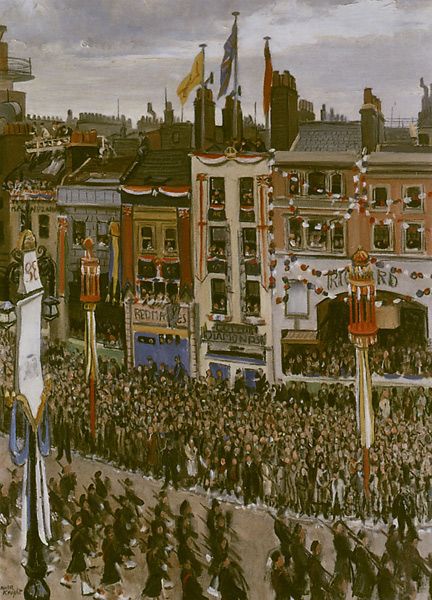 Sixteen months of preparation preceded the one-day ceremony.  The Coronation took place in Westminster Abbey.  Soldiers from throughout the Commonwealth marched in parade prior to the Queen's arrival.  Laura Knight was one of the official artists commissioned to commemorate the event.  Her rapidly painted and highly coloured canvas  - which is likely to have been painted on the spot - records the Coronation procession passing through Oxford Street with  Scottish Guards on parade.    Oxford Street, although since rebuilt, was characterised by narrow frontages (still in evidence around the junction with Bond Street).

The coronation of the Queen was the first ever to be televised watched by 27 million British viewers (when its population was 37 million) who had acquired television sets especially for the event. It was also the world's first major international event to be broadcast on television with 750 commentators broadcasting descriptions in 39 languages. 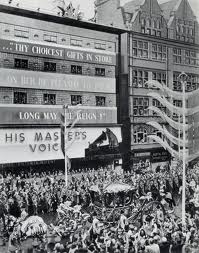 We are grateful to Michael Barker for assistance.