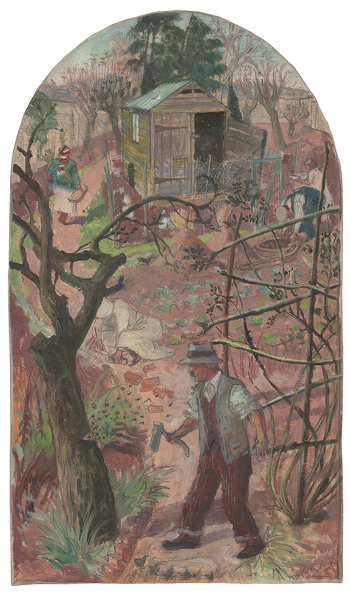 Exhibited: Evelyn Dunbar - The Lost Works, Pallant House Gallery, October 2015 - February 2016, cat 25.
Literature: Evelyn Dunbar - The Lost Works, Sacha Llewellyn & Paul Liss, July 2015, cat. 25, page 65.
This sketch – as well as the one on the opposite page – was for a mural panel in the hall of Brockley County School for Boys. Both were probably prepared in case of a shortfall of artists to complete the scheme, but neither were in fact used.
The Brockley Murals
Art educators saw murals both as a training method in the classical tradition, and as
an affirmation of the value of artists to society. Sir William Rothenstein, the Principal
of the Royal College of Art, made a broadcast in 1932 on ‘The English Artist and the
English Public’, stressing the value of honestly painted everyday subjects from nature
as a counterweight to Modernism on one hand, and the devotion even of topographic
painters to foreign places on the other. ‘Being in daily touch with students’, Rothenstein
told his listeners, ‘I know that there is no lack of blossom; that the English genius for
rich content still persists.’ Dr. Sinclair, the headmaster of the Brockley County School for
Boys in the London borough of Lewisham, then the suburban fringe of Kent, responded
by offering his school hall, with its five arched recesses, and a balcony with a vaulted
underside. The result, in Rothenstein’s view, was the best mural cycle since Ford Madox
Brown’s work in Manchester Town Hall.
Charles Mahoney, as a tutor at the RCA, assembled a team of younger women
collaborators, with Dunbar as the senior among them, and two who were still students:
Violet Martin and Mildred ‘Elsie’ Eldridge. According to Eldridge’s memory in the 1980s,
they were united chiefly by their dislike of London and yearning for the country. The
chosen theme was Aesop’s Fables, which gave scope for narrative themes in landscape
settings. Dunbar painted ‘The Country Girl and the Pail of Milk’, one of five large arched
panels, in which the main story in the foreground is perhaps less dramatic than the
before-and-after episodes of the fable drama in the background. It is fascinating, in the
light of this work, to see two of Dunbar’s newly discovered schemes for the panels on the
facing wall. Both have the same spatial design, with a winding road containing the main
subject at the bottom, and additional figures. Hercules, the god of the title, is contained
in a tondo shape, filling the arched top, (CAT 24) while in The Woodcutter and the Bees
(CAT 25), a carefully observed rural scene, the chicken hut peforms an equivalent role
in the composition, while a visually intriguing framework of green branches fills out the
bottom right corner.