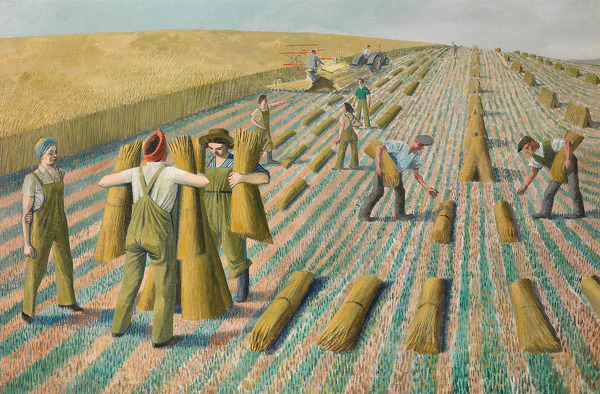 “Men Stooking and Girls Learning to Stook” was executed while Evelyn Dunbar was working as one of the very few female British war artists of World War Two. It depicts Land Army girls (and their male companions, as yet unconscripted farm workers) working in fields – probably near the Sparsholt Farm Institute in Hampshire – to assemble stooks of wheat from machine-bound sheaves. Echoing Dunbar’s illustrations for instructional works such as A Book of Farmcraft (1942), all the stages of the stooking process, from reaping, through sheaf-binding and gathering to the creation of the stooks themselves, are pictured. There is formal interest in the rows of wheat leading to the far horizon, handled in almost pointillist style, and further impetus provided by the tractor pulling reaping and binding machinery, but the painting is dominated by the robust group of three figures in the foreground. With dungarees, practical headgear and thoughtful expressions, the physical weight of the wheat is apparent in their postures.

This painting, submitted by Dunbar in 1941 to the War Artists’ Advisory Committee but not purchased by them, was given by Dunbar to her friend Margaret Goodwin and was essentially unknown until its rediscovery by Andrew Sim in a provincial sale in 2011. Interest in Dunbar’s place in the story of twentieth-century British art has increased following the landmark 2006 St Barbe Museum exhibition curated by Gill Clarke and accompanying book, a 2015 Pallant House exhibition curated by Liss Llewellyn featuring other previously lost works, and the 2016 biography Evelyn Dunbar: A Life in Painting by Dunbar’s nephew Christopher Campbell-Howes.

Commentary by Iain and Barendina Smedley. They are collectors interested in British art from the first half of the twentieth century and the art of the war years in particular.