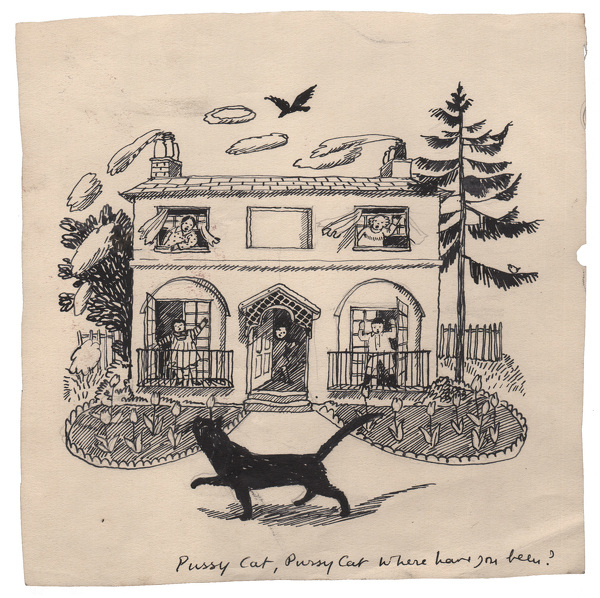 "When Evelyn Dunbar enrolled at the Royal College of Art in 1929 it was a toss-up as to whether she would apply for the Design School or the Painting School and although Painting won she maintained a strong interest in design and included many designerdraughtsmen among her friends, particularly Edward Bawden and Barnett Freedman.

Like them she enjoyed free-hand pattern-making and filled many sketchbooks with pictorial jottings of people, places and incidents which could be worked up later when required into vignettes to decorate such publications as The Scots Week-End (page 170) and Gardeners’ Choice (pages 82-95). Equally, they could be incorporated into subject paintings like The Days of the Week, or used in any one of her other decorative projects. Whether working in sketchbooks or on loose scraps of paper she was happy drawing in line either with pen or pencil, or with clean strokes of a well-charged brush, using the latter particularly to create decorative patterns often reminiscent of Vanessa Bell’s designs for Hogarth Press bookjackets for her sister’s – Virginia Woolf’s – novels.

Through Mahoney and other Royal College contacts she would also have been familiar with the work of the Curwen Press, particularly the pattern papers inspired by the recently deceased Claud Lovat Fraser and produced by Paul Nash, Edward Bawden, Enid Marx and others.

In her early days she had a natural playfulness which is reflected in her illustrated letters to Jane Carrington and Edward Bawden; those to Charles Mahoney – who she addressed variously as ‘Dear Chas’, ‘Dear Matey Cock’ or ‘My dear old potting shed’ – stand out particularly. By the late 1930s this natural gaiety and joie de vivre gave way to a less light-hearted mood as the disparity between her Christian Science upbringing and Mahoney’s atheistic socialism increasingly drove a wedge between them. Apart from the rift with Mahoney this mood of greater seriousness chimed with that of the country as a whole as the clouds of impending war grew ever darker. Her Shell poster designs (CAT 82-84) probably date from this time and it is probable that Barnett Freedman encouraged her to produce some possible ideas as, in the late 1930s, he was commissioned by his friend Jack Beddington, who ran the Shell publicity department, to create ‘puzzle’ advertisements for use in various technical journals. Dunbar may have thought that with their simple kitchen imagery of shelling peas combined with semihumourous captions – ‘I Shell’, ‘Thou Shellest’ – they might appeal to various ladies’ journals. (see Ruth Artmonsky, Jack Beddington, The Footnote Man, London, 2006, p.54).

It is not surprising that they were not developed further, but they were the precursors to Dunbar’s Mother Hubbard (CAT 81) commissioned by I C I, and used for publication in a variety of different publications in much the same manner as Beddington’s ‘puzzle’ advertisements.

Scrapbooks and artists’ Christmas cards were a particular feature of the interwar period and beyond. Edward Bawden’s and Eric Ravilious’s scrapbooks in the collection of the Fry Gallery, Saffron Walden, contain many examples of cards from John Piper, Graham Sutherland, Geoffrey Rhoades and other artist friends, including Dunbar and Mahoney.

After her marriage to Roger Folley Evelyn continued to produce her annual card usually accompanied by some verse by her husband: that for Christmas 1947 – one of the bleakest of postwar winters – depicts a particularly jolly figure of Pomona, the Roman goddess of fruit trees, gardens and orchards (FIG 23), reminding us once again of Evelyn’s delight in animating the spirits of the months and seasons, virtues and ancient gods. Christian Science could not erase these pagan deities from her pantheon."