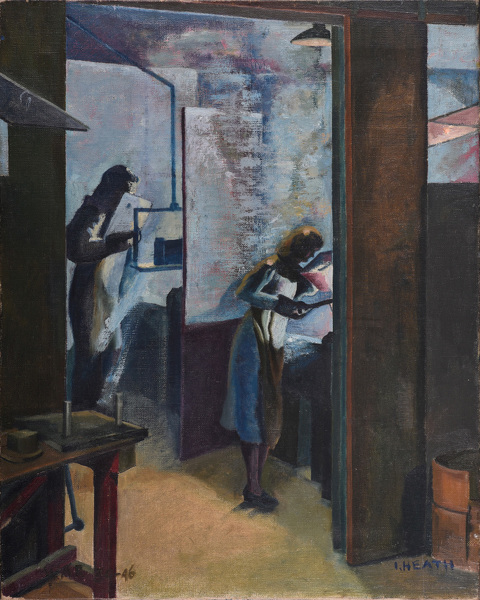 Exhibited: WW2 - War Pictures by British Artists, Morley College London, 28 October -23 November 2016, cat 82.
Literature: WW2 - War Pictures by British Artists, Edited by Sacha Llewellyn & Paul Liss, July 2016, cat 82, page 125.
The two arc welding women wear protective leather aprons and welder's helmets fitted with a filter shade. They work in separate cubicles to avoid damaging each other's eyes. The bench-height producction suggest that the women were making steel light fabrications such as containers for munitions.
During World War II Heath volunteered to work as an artist for Ministry of Information drawing and painting naval subjects and factory workers in Howton's munitions and camouflage factory at Ives and the Spitfire Fighter Station at Perranporth. She married an Italian Prisoner of War, Dr Marc Prati - a political correspondent for the Italian newspaper La Stampa, who had been interned in Cornwall.
By 1943 there were 7.25 million women engaged in war-related employment , the majority in agriculture, manufacturing and ciil defence. Evelyn Dunbar, the only woman to receive a full time salary, was commissioned to produce ‘agricultural and woman subjects’.
Although recording the role of women was one of the stated aims of WAAC as Brian Foss has pointed out the scheme nevertheless favoured images of women performing conventional roles - for instance the predominance of paintings of women as nurses inspite of the fact that in 1943 munitions worker outnumbered nurses by 100 to 1 is noticeable. Like other female War Artists Heath delighted in showing women at work in some of the more unusual roles they performed during the war.