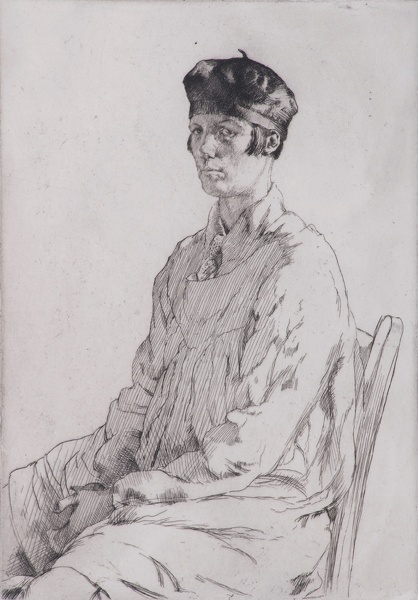 Phyllis Dodd was an accomplished portrait artist. Studying at the Liverpool School of Art from 1917–21, Dodd received a Royal Exhibition Scholarship and attended the Royal College of Art for four years – alongside Henry Moore (1898–1986), Raymond Coxon (1896–1997) and Edna Ginesi (1902–2000), with whom she would remain friends for the rest of her life – winning the Drawing Prize in her final year. 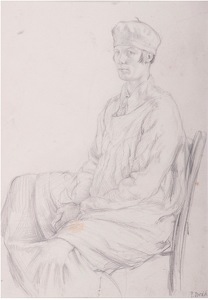 Kathleen Bridle was born at Swalecliffe in Kent on 19 November 1897. Bridle enrolled at the Dublin Metropolitan School of Art (DMSA) in 1915. She won a teacher-training scholarship in 1917 and in 1920 a scholarship to the Royal College of Art  Whilst there she became good friends with John Hunter, who gave her the nickname "Pindi", a name she kept for life.During this time she also became friends with the sculptor Henry Moore. She won the George Clausen prize at the RCA for her 1924 portrait of Norah McGuinness.

Bridle was employed briefly as a glass painter in the Dublin studio of Harry Clarke. Bridle was one of the founders of the Ulster Unit in 1934, and was featured in their inaugural exhibition. She was a regular exhibitor with the Ulster Academy of Arts from 1931 to 1949, being elected an associate in 1935 and an honorary member in 1962. In 1936 she held an exhibition at John Magee's gallery in Belfast. In 1947, Bridle's second major exhibition was held at the CEMA gallery, Belfast

A major retrospective of her work was held at the Fermanagh County Museum in 1998, which was toured to the Ulster Museum and the Armagh County Museum. Primarily Bridle was a watercolourist and landscape painter, but she also painted portraits in oils. Her 1948 self-portrait is held in the National Self-Portrait Collection of Ireland.