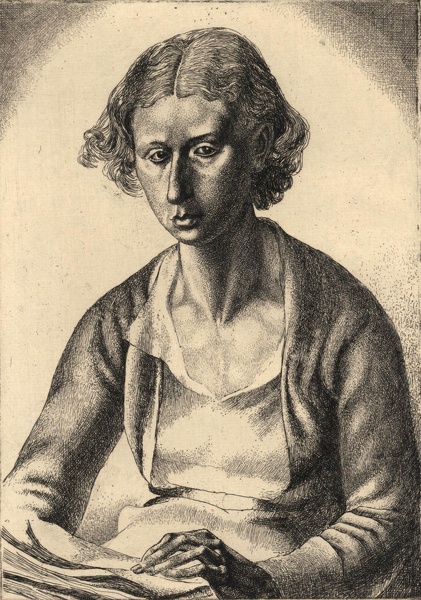 From Rembrandt’s celebrated portraits to Vic Mensa’s The auto-biography (2017), the art of self portraiture remains the most subjective form of all self-expression. So Where might Phyllis Ginger’s self-portrait fit into this artistic and cultural narrative?

Phyllis Ethel Ginger was born in Surrey on October 19th 1907 and enrolled at the Richmond School of Art in 1932, later winning a scholarship to the Central School of Art and Design (1937-39). Belonging to a generation in which female artists were often marginalised, Ginger here made a point of depicting herself as a independent  female artist., This harshly honest etched image can be dated to her time at The Central School, (circa 1937), where she studied under the tutelage of William P Robins, (circa.1937): she had cut her long dark auburn hair after having recently left her civil service clerking job.

Although Ginger made self portraits at various points in her career she was more drawn to portraying her friends and family, retaining a certain diffidence about her own image.  Indeed, Eleanor Durbin, the artist’s daughter, declared that “portraying friends and family members was much more in her character. She was interested in recording others, and was more generally self effacing about her own image on paper”.