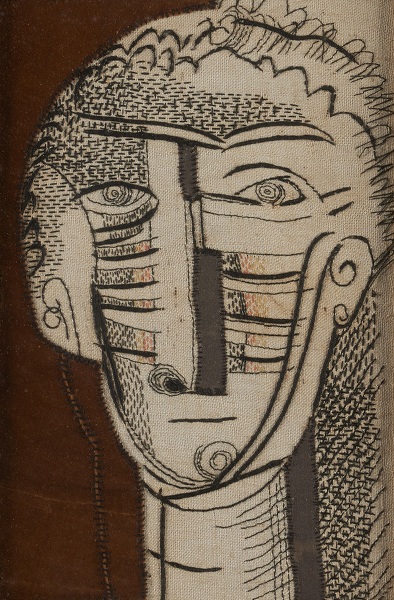 From a formalist perspective, the facial features are stylised, veering towards abstraction, linearity. The hair curls, and there are striking vertical markings on the cheeks that are suggestive of West African ritual scarification. Eyes – and ears – are open, mouth is closed. This face as represented is not in the act of speech, but it is attentive. It is a face that could be female, maybe male, or indifferent and undifferentiated. The title maintains a gender neutrality, stating only that it is a ‘Hieratic Head’.

Composed on a linen ground, most of the facial details are embroidered. There are also three dark fabric panels. They are more coarsely stitched on, in the manner of a quilt, the narrow rectangular panels evoking in particular Kente strip weaving and its echoes in African- American quilting traditions.

This ‘Hieratic Head’ makes allusions that seem to be undercut by the medium: the ‘applied art’ of embroidery. Frances Richards attended the Royal College of Art, where she received formal training in art and was especially drawn to learning tempera and fresco painting. What about embroidery, and quilting – where and when did she learn those craft techniques? And why, given her training, did she choose to create toiles brodées that evoke the kind of women’s work that was widely taught to girls, rather than learnt in college? Perhaps it is not the title but the very medium of embroidery that makes the strongest, and most poignant, intellectual claim here, by pointing to our assumptions about the materials and methods that are usually deemed suitable for artistic and intellectual expression.

Commentary by Sophie White, Associate Professor of American Studies at the University of Notre Dame. She is the author of Wild Frenchmen and Frenchified Indians: Material Culture and Race in Colonial Louisiana (2012) and the forthcoming Intimate Voices of the African Diaspora: Narrating Slavery in French America 2019.