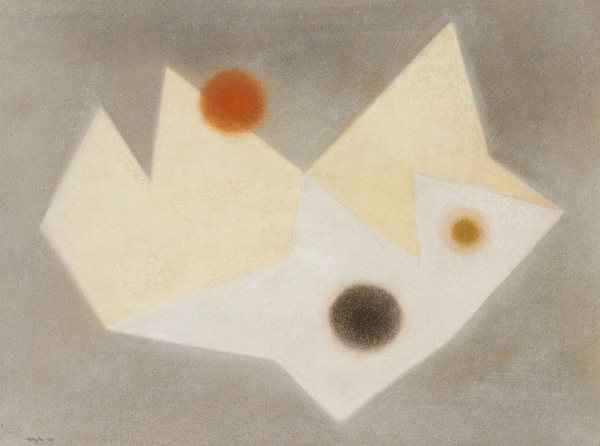 Paule Vézelay (née Marjorie Watson-Williams) studied at Bristol School of Art, London School of Art and Chelsea Polytechnic. She first exhibited in London in 1921 and joined the London Group the next year. In 1926, she moved to Paris and adopted the name Paule Vézelay, which — despite the moniker’s distinctly French nature — she claimed was “for purely aesthetic reasons”.

Vézelay counts as one of the earliest and most imaginative British abstract painters; her interest in abstraction pre-dates that of Barbara Hepworth and Ben Nicholson and precedes the infamous Unit One exhibition of 1934.

Speaking of her style in 1933, Vézelay wrote: ‘Of my own work I must say that I hope to give intense pleasure to the eye of the beholder, enticing his regard to remain on colours and forms more pleasing than can easily be found in actuality, or seen by his own unaided imagination. I hope this pleasure will prove a kind of music for the eyes, and may hold his regard long enough to convey what I am telling with this mysterious language of paint; since it is something that can only be painted.’ (Paule Vézelay, Paris 1933, unpublished text, Tate Archive TGA 9027/1/2/1.)

A retrospective of her work was held at the Tate Gallery in 1983, and she was recently subject to an ‘In Focus’ exhibition at the Tate Britain.