Painter, born in Dunedin, New Zealand, who came to London in 1900. She earned the money to do so from piano lessons, selling watercolours and black and white illustrations for newspapers. Hodgkins travelled around Europe, particularly in France and spent ten years in Paris, taking a watercolour class of her own at Académie Colarossi where in 1910 she was appointed the first female teacher. Hodgkins first visited Cornwall in 1902 spending about 3 months there in the springtime having previously attended Norman Garstin's summer sketching classes in France in 1901. Soon after she showed at the Newlyn Art Gallery and then returned to France. She returned to England shortly before the WWI and befriended Cedric Morris who encouraged her to stay, which was to make St. Ives, Cornwall her home until 1920.

From 1923-26, she lived in Manchester and while there she worked for the Calico Printing Association and exhibited at the little-known Manchester Society of Modern Painters. Moving to London she showed with the London Group and 7 & 5 Society and at the Storran Gallery. An association with the St. George's Gallery in London and then the Lefevre Gallery, latterly brought her fame in her sixties. Originally a member of Unit One she eventually resigned and was replaced by Tristram Hillier.
She showed at a variety of venues that included the International Society of Sculptors, Painters & Gravers, Birmingham Museum and Art Gallery, Baillie Gallery, Chester Gallery, Fine Art Society, Grosvenor Gallery, Glasgow Institute of the Fine Arts, Goupil Gallery, Walker Art Gallery, Lefevre Gallery, Leicester Galleries, London Salon, New English Art Club, Royal Academy, Redfern Gallery, Royal Institute of Painters in Water Colours, Royal Scottish Academy, Royal Scottish Society of Painters in Watercolour and the Society of Women Artists. Examples of her work are in the collections of Bangor University, British Council, Brighton Museum & Art Gallery, Bristol Art Gallery, Glasgow Museums, Government Art Collection, Leeds Museums and Galleries, Manchester City Galleries, Pallant House Gallery, Plymouth Art Gallery, Southampton Art Gallery, Tate Gallery and the Towner Art Gallery.
With thanks to artbiogs.co.uk 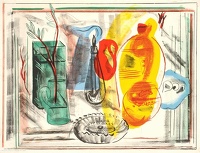 Frances Hodgkins
An Arrangement of Jugs, 1938