Mary Gibson was born in Wolverhampton the daughter of a pharmacist and studied at her local School of Art and at the nearby Birmingham School of Art. She was subsequently active as an artist from c.1912 onwards and showed her work as a painter, bookbinder and leather worker at the Royal Academy, Royal Birmingham Society of Artists, and at the Walker Art Gallery. She also taught leatherwork design and bookbinding at Wolverhampton School of Art.

Gibson was active as an artist until at least the early 1940's and her death was recorded in Devon. Wolverhampton Arts and Heritage have a painting by her in their collection.

Her unusual middle name is sometimes wrongly spelt as 'Gwenllian'. 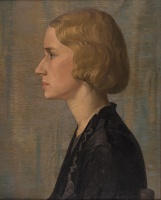