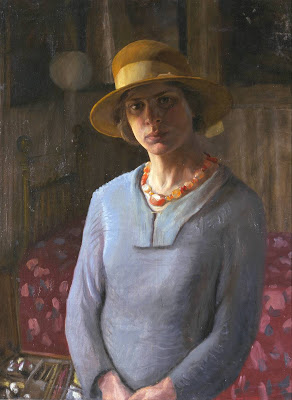 Hilda Carline studied at Percyval Tudor-Hart’s School of Painting in Hampstead (1913) and served with the Women’s Land Army (1916–18), before enrolling at the Slade School of Fine Art under Henry Tonks in 1918. Quickly gaining critical recognition, she exhibited at the LG (1921), the RA and the NEAC.

This impressive start to her career faltered, particularly after she married, in 1925, the artist Stanley Spencer (1891–1959). Their turbulent union resulted in periods when Carline hardly painted at all and eventually, in 1942, she suffered a breakdown.

Nevertheless, she never neglected painting entirely, and even during these challenging times produced animated, vigorous work, such as her 1933 portrait of Patricia Preece (1894–1966) – her husband’s mistress – entitled Lady in Green.

After her divorce in 1937, Carline began working more frequently once again, producing numerous pastels which explored her religious beliefs.

See all works by Hilda Carline >