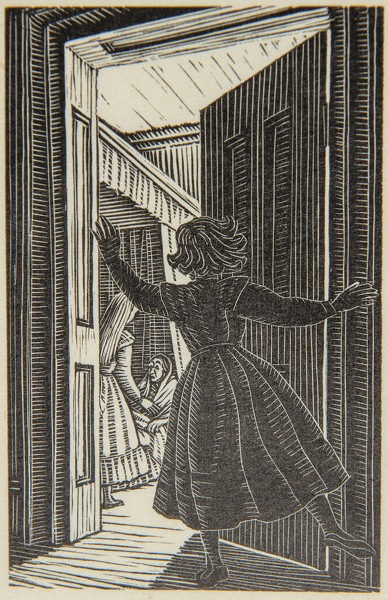 The Princess Lost, No 1was produced by Gwen Raverat as an illustration for The Wild Swans by the well- known Danish author Hans Christian Andersen. As a trial proof, it differs from the final editioned version in which various details were further refined and the proportions of the composition altered. The fairy- tale stories were popular in the mid-1920s in Britain, their escapism providing reassurance at a time when the country was experiencing economic crises and social unrest. Raverat created this scene with simple yet evocative white lines cut out of a black background. She trained at the Slade School of Fine Art in London, and later played a fundamental role in modernising the technique of wood engraving in Britain. In the ten years between The Princess Lost and Whoop for the Runaway there is a marked evolution in the artist’s style as she moved towards a greater economy of line and design, exploiting the qualities of wood engraving to their fullest potential. Raverat was especially interested in children’s fiction and most of her book illustrations were produced from the 1930s. She spent most of her life in Cambridge and her child- hood home is now situated within Darwin College, University of Cambridge, named after her grandfather, the great naturalist Charles Darwin.