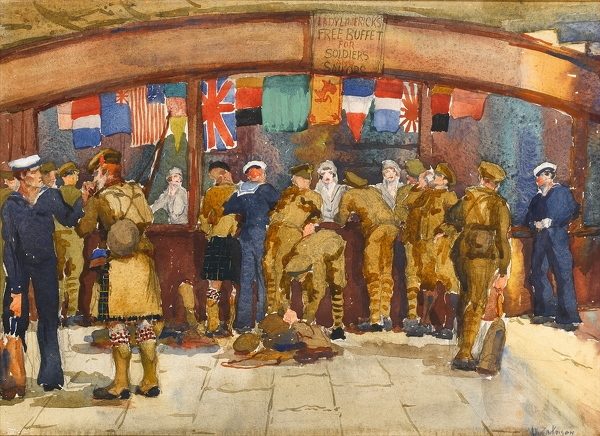 This picture depicts Lady Limerick’s Free Buffet at London Bridge Station, with the flags of the allies suspended overhead.

It was Lady Limerick who had the brilliant idea of planning a Free Refreshment Buffet for travelling soldiers and sailors at London’s Bridge Station, and helped to start the Buffet with funds raised on Shamrock Day. Here the travelling soldier or sailor can get a free meal at any hour between 8 a.m. and 10 p. m. – hot tea, coffee, or cocoa, sandwiches, cake, and cigarettes, and for those who are going to the Front letter paper and pencils are provided. An average of 1200 men or more are thus fed per day.The authorities are immensely pleased with this scheme, as the men are kept away from the public-house, and the men also greatly appreciate the interest shown in them by the thirty or forty lady workers (Lady Randolph [Jennie Jerome] Churchill (ed.),Women’sWarWork, C. Arthur Pearson, London, 1916).