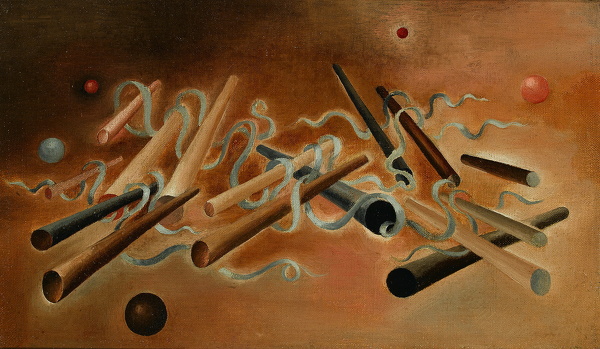 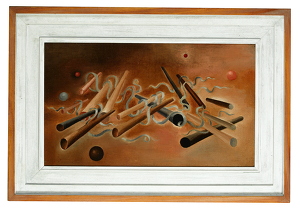 Paule Vezelay, in her own words ‘left London in 1926 and....lived in Paris because I (thought) my work (could) develop more freely there than elsewhere. My sympathy was with art of today which really exists and lives at its best Paris’. She added that ‘it was not until 1928 that I painted my first picture of objects which were purely imaginary and different from objects which I had actually seen. Grandually with its development my worked seemed to contain little trace of English artistic tradition, and my own English family name (Marjorie Watson-Williams) seemed tour of place on my canvases; it was then, in 1927 for purely aesthetic reasons and with no wish to change my nationality, that I adopted the pseudonym Madame Paule Vezelay, under which name I contiue to work’, (Paule Vezelay, undated sheet of notes, circa 1936) She recalled years later how she ‘met a great number of artists in Paris, almost everybody’: among them Picasso, Bragque, Gris, Kandinsky, Matisse, Miro, the Dalaunay’s, Arp and Taeber-Arp, Mondrian and Giacometti. ‘I was thrilled to be in Paris when all the giants were there; Braque and Picasso were doing some of their most vigorous work in the next street to my little studio…. Gradually, I became less interested in what I saw and more interested in angles and light.’ Although she had supporters in England, such as Paul Nash who admired her achievements, J.P Hodin pointed out in 1977 that’the reason why there was such a deloy in the recognition of Paule Vezelay’s qualities in England in comparion with the great prestige which she enjoyed abroad, lies to some extent in the shyness and modesty of her character and above all, in the pre-war lack of interest in avant-garde ideas in Englad, and last but not least, by the long sojourn of the artist in France. The thinly applied paint on a graduated background, found in Tubes and Ribbons, is typical of Vezaley ‘s paintings of the early 30’s. Choosing often to work in pastel on canvas Vezealy explored this effect further in works such as L’Arbre 1932, and Composition 1933. This contrasts with the hard solid colour fields she used as the decade progressed, though typically she retained the graduated backgrounds (three forms on yellow ground 1936). 1933 represented a tumultous year for Vezelay. In 1929 she had fallen in love with the prominent Surrealist Andre Masson – their passion culminated in April 1932 when they made a formal marriage contract which was left unfulfilled as their relationship disintegrated due to Masson’s violent outbursts.. After fleeing Mason Vezelay described this period as containing “the happiest moments of my life…. I shall never find them again …. I know all too well that from this moment onward my soul will seek yours, continually , and without hope.” The source of all of the above quotes is; Paule Vezaley and her circle, Paris and The South of France, England and Co, 2007. We are grateful to Jane England for assistance.