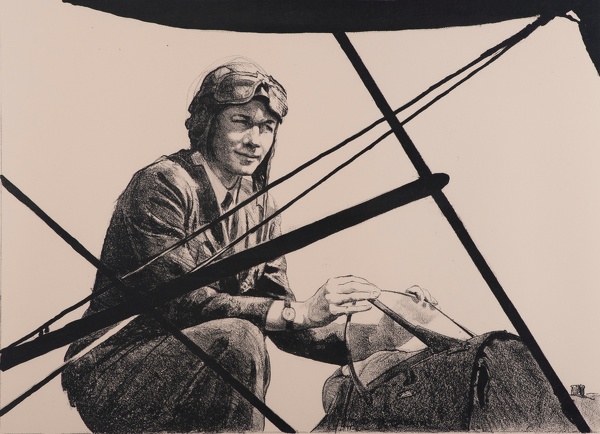 Ethel Gabain was commissioned by the War Artists’ Advisory Committee to produce four lithographs of Women’s Voluntary Services members and four on the subject of child evacuees. Six appeared in Women’s Work in the War (other than the Services). This portfolio was issued in 1941 by His Majesty’s Stationery Office and published under the auspices of the Ministry of Information.

Although she was herself in delicate health, Gabain travelled widely to source her images and the scenes portrayed are notable for the robustness and industry of the women depicted. Often the figures are rather androgynous – perhaps to reinforce the notion that a wide range of activities could equally be undertaken by either sex – with only headscarves suggesting that it is women who are involved.

In contrast to her later work, which often depended for its success on the subtle use of light and shade, these WWII images are immensely strong on detail and Gabain exhibits both a superb draughtsmanship and full command of the lithographic printing process.

Whilst all six images are of the highest quality, the portrait of Captain Pauline Gower of the Women’s Auxiliary Transport (WAT) serves as a cogent reminder of the heroism of this extraordinary group of female pilots who delivered Lancaster bombers singlehandedly, whilst also flying Hurricanes and Spitfires between air bases. We were all reminded of this exceptional endeavour when Mary Ellis of the WAT died in July 2018 at the age of 101.

Commentary by Stuart Southall, actuary and print collector. He has a collection of over 4,000 works on paper and is a regular lender to exhibitions.