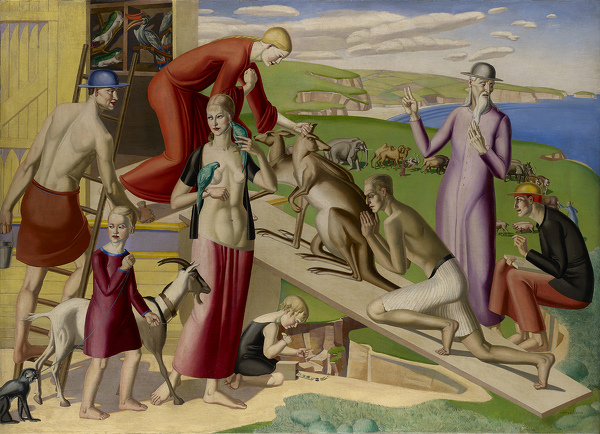 Exhibited: Daily Express Young Artists Exhibition at The Galleries of the Royal Society of British Artists in Pall Mall in June 1927

Noah's Ark was exhibited at the Daily Express Young Artist's Exhibition at The Galleries of the Royal Society of British Artists in Pall Mall in June 1927 where it was on sale for 100 guineas.

The work is highly original; with its well defined outlines, clearly delineated areas of bold and vigorous colour and hard-edged imagery, it shows the influence of Vorticism. Hynes was friends with Ezra Pound, the American poet and critic who gave the name Vorticism to the movement in 1913. In 1956 Pound wrote to Hynes: Wyndham Lewis certainly made Vorticism. To him alone we owe the existence of Blast

The Observer's Italophile critic P G Konody also saw the influence of the Italian Renaissance in Hynes work, writing in 1922, her assumed naivety, backed by consummate draughtsmanship, is perfectly delightful, her sense of humour probably unique among women artists"