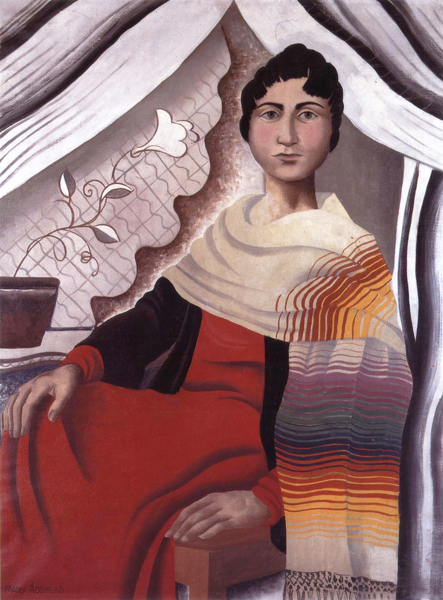 Provenance: From the Artist's Estate

Mary Adshead’s figurative works often combine a fashionable Primitivism, with a fluency and humour rarely found among her contemporaries. Indeed, her portraiture has a warmth and humanity that is arguably lacking in some of her fellow Slade alumni, who tended towards a certain detachment and distance in their figure composition.
Such qualities can be seen in her Portrait of Beth Tomalin; a friend of the artist, and local of Hampstead. In the painting, Tomalin fixes the viewer with a bold stare, as her cropped, uneven hair frames a visage. Swathes of curtain fall behind the sitter, and strike a visual chord with the scarf which partially shrouds her figure. To the side, a flower – decoratively treated and pared down to it’s essential parts – extends towards Tomalin.
The family history of the  Tomalin makes interesting reading: Beth was married to Niles Tomalin, but left him for another man called Niles. And the first Niles got together with another woman called Beth (Elisabetta, the German emigre artist-designer who is the grandmother of architect Thomas Heatherwick). Beth’s son Nick Tomalin was a legendary journalist who was killed by a Syrian missile in the 1973 Arab-Israeli war.
We are grateful to James Bone for assistance.