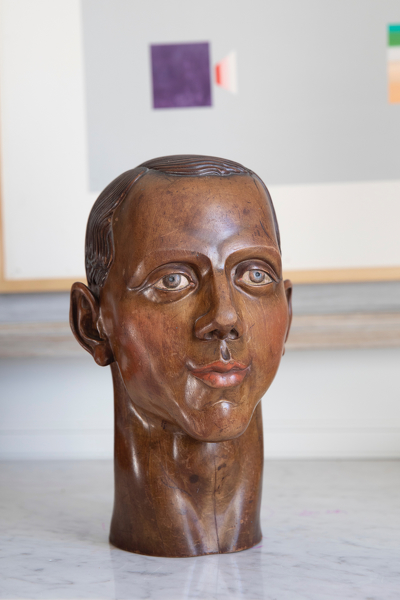 Anthony Butts (1900 - 1941). Painter, writer and Dilettante, companion of William Plomer, and fictionalised by him in Museum Pieces, 1952. vividly described by Stephen Spender in World Within World, 1951.

On Butts' appearance, Spender wrote: 'He had eyes of a china blue which stared out of their facade of a slapstick face, with a solemnity which would suddenly collapse into laughter'. Spender added: 'He was one of those extremely talented people who do not know how to direct their gifts. During one promising period of life he became a painter, and was for a time a pupil of Sickert.' Spender, reproduced by University of Berkeley Press, 1966, p. 150.

In her biography of Elizabeth Bowen, Patricia Laurence notes that Butts painted the novelist's portrait in 1938. Laurence writes that Bowen 'found him fascinating and admired his wildness and unique way of talking, particularly about his family: he was descended from Thomas Butts, a patron of William Blake. After Woolf's suicide in March, 1941, and that of Butts' two months later, Bowen confided to Plomer that they were the only two people she missed'.