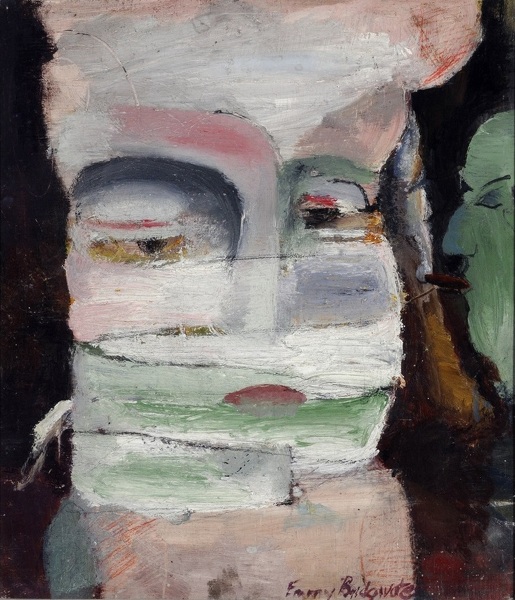 Generally: Expression of agony. Betrayal by a lover. An archetypal theme.

Specifically: Close-up self-portrait of Emmy Bridgewater at age thirty-six, recently abandoned for another woman by Toni del Renzio – the reptilian creature on the right.

Historical Context: The dismal English wartime year of 1942. The world of Guernica – both the painting and the terror bombing.

Cultural Context: Post the deployment of agony as propaganda – in Western art, that escalation from the Laocoon and the Dying Gaul to Goya and Otto Dix. This portrait inaugurates the outing of personal pain – after Munch’s histrionic cartoon and toward Bacon’s smouldering within.

Commentary: The conception is simply brutal, because it is brutally simple. Raw spatulas of paint bandaged across a battered face. Only the eyes remain, one in pain and the other in bewilderment. Never does the formalism of Picasso’s disparate eyes so disclose the soul within. Only a woman, and a courageous one, would expose such vulnerability to the public gaze. It is a deeply feminine achievement.

Commentary by Andres Duany. Duany, a founder of the Congress for the New Urbanism, is a Cuban-American architect living in Miami, USA and Uzes, France.