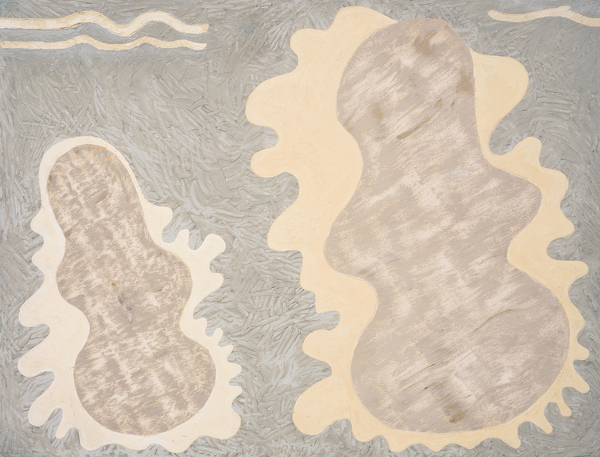 Even at the end of her career, Jessica Dismorr was still making radical shifts in her practice. This abstract, one of a series of such paintings that preoccupied her final years, is typical of the palette of soft greys and putty colours and the curving amorphous forms in her work of the late 1930s.

Although this painting may at first seem quiet, restrained and even elegant to our eyes, Dismorr chose to show these late works at the antifascist artists groups that were being formed at this time in response to the rise of the Nazis. She exhibited with the Artists’ International Association, and was one of only seven British women to be included in Die Olympiade onder Dictatuur in Amsterdam in 1936, an international show designed to counter the Nazi propaganda minister Josef Goebbels’ efforts to condemn Modernism. Among the books in Jessica Dismorr’s library after her death in the summer of 1939 was a copy of 5 on Revolutionary Art (London, Wishart, 1935), a volume of collected essays on how art could answer the political crisis and lead the way forward.

In that sense, even though Untitled may seem worlds apart from Dismorr’s early work as member of the Rhythm Group in the 1910s – with its figurative subject matter and vivid palette – there is consistency and common ground in her unceasing risk-taking and desire to be part of an avant-garde whose work spoke to the modern world.

Commentary by Alicia Foster, art historian and novelist. She is curating an exhibition, Jessica Dismorr and her Contemporaries, which will open at Pallant House Gallery in 2019.