MURIEL PEMBERTON invented art-school training in fashion in Britain and, in doing so, affected attitudes to fashion design throughout Europe. Before she became involved in the field, fashion training had existed almost exclusively within the strictures of the couturier system. She brought the freedom of a painter to the discipline of designing and making clothes, and throughout her career she pursued in tandem her two great talents for painting and design.

Pemberton's qualities as a painter, as distinct from those as a teacher, were revealed to many of her students only in retrospect, at an exhibition held this year at Chris Beetles Gallery to coincide with the publication of her biography written by John Russell Taylor. And yet teaching and painting were very much two aspects of a single aesthetic. The way in which Pemberton thought about clothes is manifest in the water-colours that she exhibited at the Royal Society of Painters in Water-Colour and the Royal Academy. Portraits were considered as extensions of her work as a fashion artist on News Chronicle (1945- 52) and Vogue (1952-56), while floral still life, inspired by the passion for gardens of her husband, John Hadley Rowe (Head of Graphics at St Martin's School of Art), was treated in terms of pattern and layering, and open to reworking (as if updated for the new season) well after the signature had been added. Even when fashion has evolved beyond present perceptions, her vital, colourful paintings will stand testament to her approach to life. 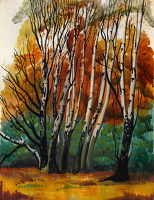