Isobel Atterbury Heath studied at the Académie Colarossi in Paris and later Leonard Fuller’s St Ives School of Painting in the 1930s.

During WWII, she was commissioned by the Ministry of Information to paint workers in munitions factories and at a camouflage factory in St Ives, which gave her the opportunity to showcase how women were employed outside the perceived female wartime roles of nurses and care-givers.

She broke away from the STISA to help found the Penwith Society of Arts in 1949, but resigned in 1950 and rejoined STISA in 1957, continuing to exhibit with them for the rest of her life. She also showed with the ROI, the RI and the RSA, and was included in the 1955 centenary exhibition of the SWA in London. 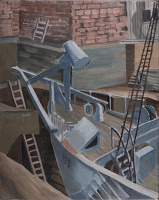