Painter née Robinson in Kersal, near Manchester. Annie as she was known studied at Manchester School of Art, in Paris and in Rome where she met and married the Manx sculptor, Joseph Swynnerton in 1883 living in the Eternal City until his death in 1910. With artist and suffragette Isabel Dacre she has already formed the Manchester Society of Women Painters in 1876 and began showing at the Royal Academy in 1879. In a prolific career she exhibited at the Royal Birmingham Society of Artists, Grosvenor Gallery, Glasgow Institute of the Fine Arts, International Society of Sculptors, Painters & Gravers, Walker Art Gallery, Liverpool, Manchester Academy of Fine Arts, New Gallery, Royal Society of Portrait Painters, Royal Scottish Academy, Society of Women Artists and in 1922 was elected an Associate of the Royal Academy. She was the first women in more than one hundred and fifty years to be accorded this honour. The New English Art Club, Royal Society of Portrait Painters, SWA and the Women's Guild of Arts also elected her to their ranks. Her paintings largely allegorical suggested the influence of the Victorian artist G. F. Watts. Swynnerton was also a founder member of the Manchester Society of Women Artists.

We are grateful to artbiogs.co.uk 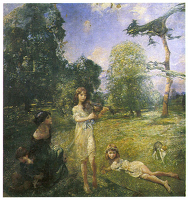