Averil Burleigh studied at Brighton School of Art and married fellow painter Charles Burleigh (1870–1956) – together they spent much of their lives in Hove and Sussex.

She specialised in tempera painting and her work is characterised by a bright palette underpinned with a bold sense of graphic design. She often painted decorative renaissance subjects whilst adding a touch of modernity, through the inclusion of contemporary clothing. Her compositions are usually dominated by female figures – often in various states of revelry. She frequently used her daughter, the artist Veronica Burleigh (1909–1999), as the central model. She also illustrated many books, including Thistledown by Leolyn Louise Everett, published in 1927.

She exhibited extensively throughout her career, including at the RA, the RSA, the NEAC, with the SWA, the ROI, Walker Art Gallery and the Paris Salon. She was also a member of the SMDPT and was elected a member of the RI in 1936 and an associate of the RWS in 1939. 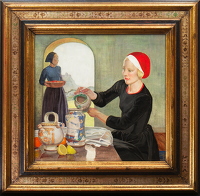 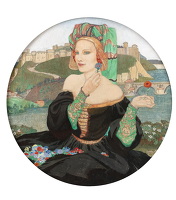