Catherine Dawson Giles was born on July 31, 1878 in Lewisham in south-east London, 1878. She attended Goldsmiths, University of London in New Cross in 1900 and later the Royal Academy. Giles studied with the American painter Max Bohm in Etaples, France, as part of the Etaples art colony. In 1904 she met the English painter and illustrator Jessica Dismorr, a fellow student at Etaples, with whom she became lifelong friends.

Giles exhibited with the New English Art Club in the 1920s and had a one-woman show of watercolours and gouaches at the Claridge Galleries. She exhibited with the Roman Catholic Guild of Artists with Glyn Philpot and Eric Gill in the 1930s. The art of Dismorr and Giles was shown in a joint exhibition at the Fine Art Society, London, in 2000. 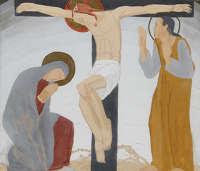