Clara Klinghoffer emigrated from Austria to England with her family in 1903. She studied art at the John Cass Institute in Aldgate and the Central School of Arts and Crafts before enrolling at the Slade School of Fine Art (1918–20).

Gaining immediate critical acclaim at a remarkably young age with her first solo exhibition, held at the Hampstead Gallery in 1919, she exhibited widely in the UK, Europe and North America in the ensuing years, including at the 1924 Venice Biennale, and the Redfern Gallery (1925) and RA (1933) in London. She also travelled extensively throughout her life, moving to Amsterdam in 1929 and New York in 1939.

Much of Klinghoffer’s work is characterised by a focus on the human figure, and she made portraits of many eminent sitters – such as Sir Winston Churchill, Vivien Leigh and Isaac Bashevis Singer – notable for their relaxed, somewhat candid composition. 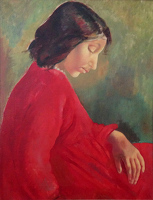 Clara Klinghoffer
The Girl with Flowers, 1920 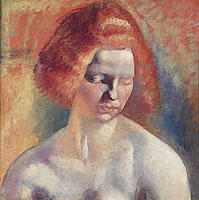