Edith Grace Wheatley (née Wolfe) studied at the Slade School of Fine Art (1906–08) and the Atelier Colarossi in Paris before marrying fellow painter John Wheatley (1892–1955) in 1912. She exhibited widely in her early career, including with the RSMPSG (1910), and was elected a member of the NEAC in 1921.

Completing several public commissions whilst a lecturer at the University of Cape Town (1925–37) – such as ceiling and wall paintings for the entrance to the National Gallery of South Africa and a sculpture for the New Law Courts in Cape Town – Wheatley was well established in the worlds of art and education by the time of her first solo exhibition at the Greatorex Gallery in 1933. On returning to England, she was appointed Director of Sheffield Art Galleries in 1937 and was elected to the RP in 1955. 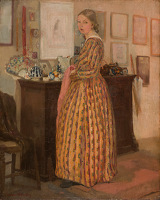