Painter, born in Bhagulpur, Bengal, India the daughter of a clergyman. Ince studied at the Byam Shaw School of Art in London, 1911-16 and during World War I served in the Women's Land Army, 1916-18. Following the war she commenced her career as an artist and over the next two decades exhibited at the Alpine Club, Cooling Gallery, International Society of Sculptors, Painters & Gravers, New English Art Club, Royal Society of Portrait Painters, Royal Academy, Royal Society of British Artists, Royal Institute of Oil Painters, RWS, Walker's Gallery in London, MAFA and the Walker Art Gallery in Liverpool. She was primarily a flower painter in tempera and oils but also showed landscapes and the occasional seascape. She was elected an Associate of the Royal Society of British Artists in 1923 and an Associate of the RWS in 1926. A painting by her, 'Flower Piece', was purchased by the Chantry Bequest in 1934. She died in Hitchin, Hertfordshire. Her work is represented in Hitchin Museum and Art Gallery, RA, Russell-Cotes Art Gallery, St. Andrews University and the Tate Gallery. 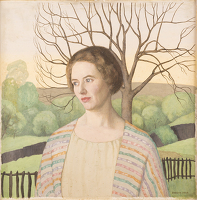