Gladys Dorothy Davison was a portrait painter and a pupil of Walter Sickert (1860–1942) – whose teaching methods are discernible in the style and somewhat melancholic atmosphere of her paintings. In 1916, she was awarded The Civic Arts Association’s prestigious War Memorials prize for Mural Painting; her submission, which was described in Colour Magazine as “attractive in its fresh colour and expression in light”, was exhibited at the Institute for British Architects to critical acclaim.

She lived and worked in St George’s Square, London, and showed with numerous prestigious institutions during her career, including the London Salon, Grosvenor Gallery, the NEAC, the RA, the ROI and the RP. 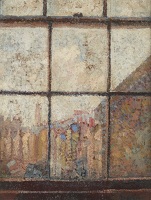 Gladys Dorothy Davison
The Window, circa 1910