By 1922 she had already achieved some commercial success, providing the illustrations for The Why Fairy Book by L.T. Watkins. After returning to New Zealand from her studies in Paris, she met fellow artist John Hutton (1906–1978). Together, they embarked on a successful and prolific collaborative relationship (eventually marrying in 1934), holding a joint exhibition in Wellington in 1936 before relocating to London that same year. They had three children – including Warwick Blair Hutton (1939–1994) who was to become a noted artist, glass engraver and illustrator – and continued to work and exhibit together in England even after their divorce in 1960.

Blair made distinctive modernist works, often painted with a palette knife. Many of her paintings also contain classical or biblical references, particularly her landscapes, which recall the backdrops to the figure paintings of the Old Masters.

Later in life she turned to making collages were mostly non-figurative (although sometimes one or two small images of people appeared in them). Many of these were shown at exhibitions in Cambridge where she lived until her death in 1997. She wrote a book on Collage (The Technique of Collage) and was particularly interested in Kurt Schwitters. She also wrote many other books - on Rug weaving, Gemstone craft, Mosaics and Woven structures.

We are grateful to Anne and Pete Hutton,  and Dean Goodman for assistance artbiogs.co.uk. 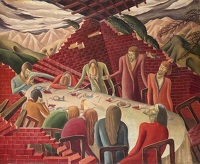 Helen Blair
Scene from the Book of Job