Madeline Green was a figurative artist who studied at the Royal Academy Schools (1906–11). Extremely active even during her studies, she joined 26 other artists in setting up the Ealing Art Guild in 1910, and in 1911 she was awarded two RA medals.

This rapid success marked the beginning of a productive career, and she went on to exhibit regularly from 1912 until the year of her death – 24 times at the RA’s Summer Exhibition alone, as well as at the RGI, the SWA, Society of Graphic Art, Venice Biennale, in Adelaide and Melbourne and at the Paris Salon – winning a gold medal for The Chenille Net in 1947.

Often using herself as the model, Green made paintings noted at the time for their overt femininity and enigmatic subjects, which investigated how notions of sexuality and gender could be explored through modernist art. 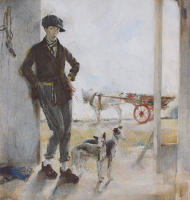 Madeline Green
Coster with Dogs, circa 1925