Marlow Moss (neé Marjorie) was born in London, and initially attended the St John’s Wood School of Art and then the Slade School of Fine Art. After formative years spent in Paris – where she became a founder member of Abstraction- Création and met her great influence Piet Mondrian (1872–1944) and her lifelong partner the novelist A.H. (Netty) Nijhoff – and then years spent in Europe, the outbreak of WWII precipitated her settling in the far west of Cornwall in 1941.

Her home and studio were in the village of Lamorna, on the Penwith peninsular, just a few miles away from the famous Modernists of St Ives – yet there was hardly any contact between them (her unanswered letters to Ben Nicholson are kept in the Tate Archives). Moss’s comrades instead were the European Constructivists – Mondrian, Georges Vantongerloo (1886–1965), Jean Gorin (1899–1981) and Max Bill (1908–1994). 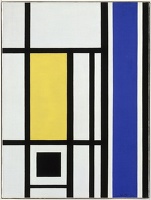