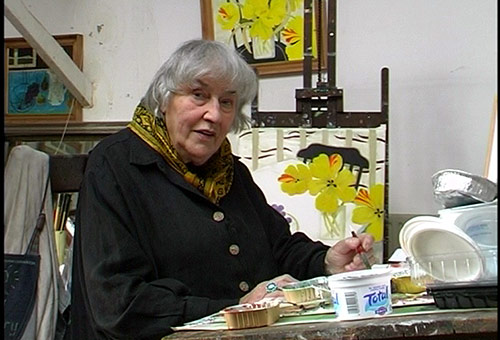 Painter and printmaker, born in Bristol, her parents were not particularly interested in art but her uncle, Romilly Fedden, encouraged her to paint so she went on to study at the Slade School of Art, 1932-36. One of her Slade teachers was émigré stage designer Vladimir Polunin, who had worked as a designer with the Ballets Russes. This discipline was to stand her in good stead when during World War II when she worked for the Land Army, she constructed stage sets for the Arts Theatre in London. She further used her experience in 1951 when she painted a children’s mural at the Festival of Britain site on the South Bank. A decade later she was commissioned by P&O for a mural on their prestigious liner Canberra. Twenty years later, by then married to Julian Trevelyan, with him she was commissioned to execute another mural at Charing Cross Hospital. As a teacher she became the first woman to instruct in painting at the RCA, 1958-64 where her pupils included David Hockney. Fedden also taught at the Yehudi Menhuin School, Cobham, Surrey, 1965-70.

In 1956 she became a member of the London Group and Chairperson of the Women's International Art Club until 1959. She held numerous solo exhibitions beginning in1953 and became arguably Britain’s most favourite artist, with collectors’ and dealers clambering to acquire her work. She held solo exhibitions at the Mansard Gallery, Redfern Gallery, the Arnolfini, Bristol. Her most recent exhibitions have been at the New Grafton Gallery, London and she was elected RA in 1982. In 2008 the Portland Gallery held a major retrospective with 125 of her paintings, executed over six decades.
Fedden was also President of Royal West of England Academy and her time there was honoured by the Academy when they named one of their society exhibition galleries after her. Her work is in most major collections in the UK including Museums Sheffield, Ferens Art Gallery, NMW, the Tate Gallery, Bristol Art Gallery, CAS, Hereford Museum and Art Gallery, HM Queen Elizabeth, Leeds University Collection, Victoria Art Gallery, Bath, Reading Art Gallery, Herbert Art Gallery, Swindon Art Gallery, Williamson Art Gallery, New Hall College, Cambridge, Pallant House Gallery, Chichester, Swindon Art Gallery, Tullie House Museum and Art Gallery, Carlisle, University of Warwick Art Collection, Southampton Art Gallery, New Art Gallery Walsall, GAC, BMAG and York City Art Gallery. In 1997 she was a recipient of the OBE for her services to art.
With thanks to artbiogs.co.uk 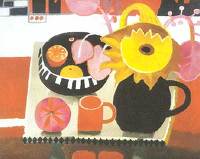