Nellie Joshua was a genre painter who made works that primarily centred around figures and interiors. Her sister Joan Joshua (1884–1965) was also an artist. Nellie attended the Heatherley School of Fine Art in the 1890s and lived in London throughout her career, exhibiting at the RA, the ROI and the SWA between 1902 and 1911.

As well as her intricate, realistic depictions of everyday scenes, she also produced paintings that explore folklore, such as Dragonfly (Fairy Boy) (c.1905), which had some success as popular prints. 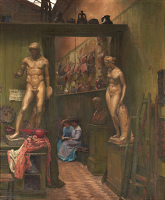