Olive Mudie-Cooke studied at St John’s Wood Art School, Goldsmith’s College, and in Venice before travelling to France in 1916 as a Voluntary Aid Detachment driver. Whilst in France, she produced numerous drawings and watercolours of the events she witnessed.

Seeking to promote the somewhat underrepresented impact of women on the war effort, the Women’s Work Sub-Committee purchased several of Mudie-Cooke’s paintings for the Imperial War Museum in 1919.

In 1920, she was commissioned by the British Red Cross to return to the Western Front as an official war artist, and she created remarkable depictions of the human side of conflict, such as British medics treating French peasants wounded by shells left on the Somme battlefield.

She exhibited at the Cambridge University Architectural Society in 1921 and travelled widely in Europe and Africa in the following years; returning in 1925 to France, where she took her life. 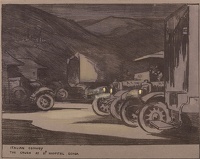