In the 1920s and 30s Gluck became known for portraits and floral paintings; the latter were favoured by the interior decorator Syrie Maugham. Gluck insisted on being known only as Gluck, "no prefix, suffix, or quotes", and when an art society of which Gluck was vice president identified Gluck as "Miss Gluck" on its letterhead, Gluck resigned. Gluck identified with no artistic school or movement and showed Gluck's work only in solo exhibitions, where they were displayed in a special frame Gluck invented and patented. This Gluck-frame rose from the wall in three tiers; painted or papered to match the wall on which it hung, it made the artist's paintings look like part of the architecture of the room.

One of Gluck's best-known paintings, Medallion, is a dual portrait of Gluck and Gluck's lover Nesta Obermer, inspired by a night in 1936 when they attended a Fritz Busch production of Mozart's Don Giovanni. According to Gluck's biographer Diana Souhami, "They sat in the third row and she (sic) felt the intensity of the music fused them into one person and matched their love." Gluck referred to it as the "YouWe" picture. It was later used as the cover of a Virago Press edition of The Well of Loneliness. Gluck also had a romantic relationship with the British floral designer Constance Spry, whose work informed the artist's paintings.

In 1944 Gluck moved to Chantry House in Steyning, Sussex, where she lived with her lover Edith Shackleton Heald until her death.

In the 1950s Gluck became dissatisfied with the artist's paints available and began a "paint war" to increase their quality. Ultimately, Gluck persuaded the British Standards Institution to create a new standard for oil paints; however, the campaign consumed Gluck's time and energy to the exclusion of painting for more than a decade.

In Gluck's seventies, using special handmade paints supplied free by a manufacturer who had taken Gluck's exacting standards as a challenge, Gluck returned to painting and had another well-received solo show. It was Gluck's first since 1937, and Gluck's last: Gluck died in 1978.

Gluck's last major work was a painting of a decomposing fish head on the beach entitled Rage, Rage against the Dying of the Light. 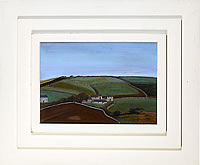 Gluck
A Cornish Farmhouse, circa 1926