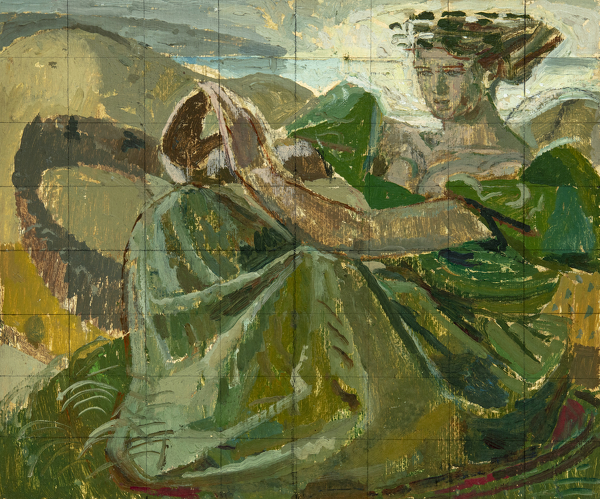 See all works by Evelyn Dunbar oil women 1.PORTRAIT OF AN ARTIST 2.dunbar 2022

Dorset belongs to the most productive period - in terms of quality - of Dunbar's life. When her employment as a war artist finished when World War 2 ended in 1945, she went to live in the south Midlands with her husband, the horticultural economist Roger Folley. Various images, mainly allegorical, pent up during the war years, now found their expression, among them Dorset. Dunbar had no particular connection with the county, but she greatly admired the writing of Thomas Hardy, for her the most elemental of English novelists. Characters who look outside the frame have a special significance in Dunbar's work, and here her figure, supposedly seated at the top of Portland Bill, is looking through her fingers at HMS Victory slowly disappearing over the south-western horizon on a voyage that will culminate in Trafalgar. She is Anne Garland, heroine of Hardy's The Trumpet Major, whose suitor Bob Loveday is serving on the battleship. Dunbar perhaps empathised with Anne Garland, as she portrays her, in her own feelings when Roger Folley, a wartime night fighter navigator, was involved in continual RAF sorties a year or two before. We can imagine that Dunbar has squared up her oil sketch because the figure of Dorset is too cramped, and she wants to re-assess the basic proportions on another canvas. We can further imagine that it may have taken Dunbar several re-workings before she finally found an acceptable proportional relationship of dress to body, arms to torso, head to neck and particularly hair, collectively expressive of the majesty, beauty and protective commitment of Dorset. 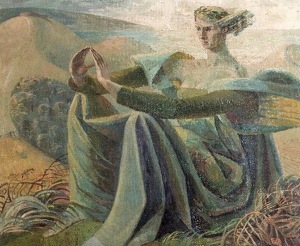 We are grateful to Christopher-Campbell Howes, author of  Evelyn Dunbar: A Life in Painting, for the above text.