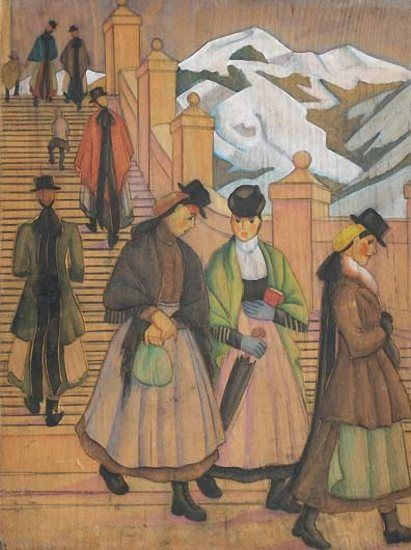 
Paterson worked in oil, pastel, watercoulour, lithography and etching, but gained her reputation through her colour woodcuts which she made using a technique which she called "woodtype".
A line drawing would be etched onto a soft wood block to create isolated sections, each of which would be individually coloured with watercolour and printed off onto a sheet of paper attached to the top of the block with drawing pins. The result was a complex, multi-coloured image produced from a single block. Most coloured woodcuts are produced using several blocks, generally one block per colour.
Paterson moved to Paris in the early 1920s and studied with Andre Lhote from 1923 to 1925. Her prints were exhibited in the Salon d'Auomne from 1923 to1930.