Painter, draughtsman and printmaker, born in Helensburgh, near Glasgow. Viola was a member of the distinguished Paterson family of artists and she was equally talented as a Colourist in oil, in watercolour and as a lithographer and engraver. As a teenager at a finishing school in London, around 1917-18, she studied with Henry Tonks at the Slade School of Fine Art, from 1919-23 attending the Glasgow School of Art under Maurice Greiffenhagen. In 1924-5 she studied in Paris at L'Academie de la Grand Chaumiere with Lucien Simon Besnard and then with Andre Lhote and thereafter continued to paint in Paris, although she also travelled widely in Europe. At the outbreak of World War II she moved to the south of France, but returned to Britain in 1941. During the war she worked for several years for the Admiralty in Oxford, after the war living in Chelsea, returning to Helensburgh in 1955. the family home, The Long Croft, had been designed by her architect father, and it embodied the last 100 years of Scottish art. A woman of private means and great vitality, Viola Paterson was a keen gardener and expert cook as well as being a prolific artist. She exhibited RA, RSA, Royal Glasgow Institute of the Fine Arts, SSA, Society of Artist Printmakers, Belgrqve and Parkin Galleries. A retrospective was held at The Round House, Havering-atte-Bower, 1983. 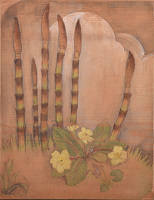 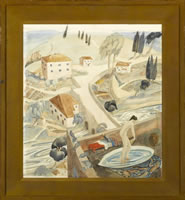