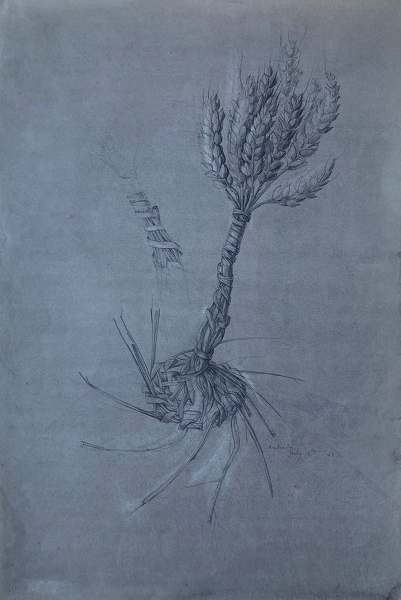 This full-size cartoon was Anne Newland’s principal work during her Scholarship at The British School at Rome, which she was awarded in 1938. In correspondence with the Secretary of the School she described it as the central panel of a triptych for which she never intended to produce the side panels. The compo- sition shows the influence of Andrea Mantegna whose works she was especially drawn to.

Ceres, according to ancient Roman myth, was the goddess of agriculture, grain crops, fertility and motherly relationships. Newland returned to the same composition ten years later in a related pencil drawing entitled Composition, The Legend of Ceres, (1949). In 1950, at The Royal Academy, Newland exhibited a variation on the theme, entitled Three Marys, which was loosely inspired by this earlier decorative composition.

The study of a wheatsheaf shows how Newland built up her design step by step, every element the subject of intense scrutiny. ‘Anticoli’ refers to the artist’s community of Anticoli Corrado (located about 40 kilometres northeast of Rome) where many Rome Scholars spent the summer. On the final cartoon corrections to the design have been made in white and there are additionally accidental splashes of ink.