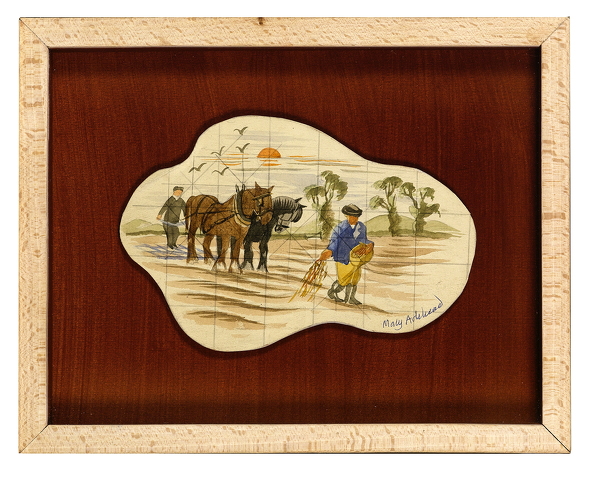 Hover over the painting to magnify (there may be an initial delay while the magnified image is loaded)
£1,100
Free shipping
Enquire
Add to cart 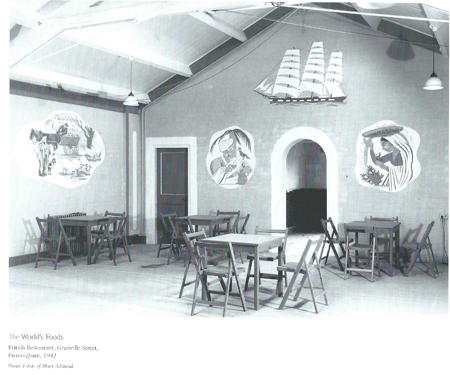 Contrary to expectation, the Second World War provided fresh opportunities for mural painting and of a kind suited to the objectives of the Society of Mural Painters (SMP). Numerous British Restaurants, works and services canteens were opened all over the country that offered unrationed cooked meals to workers, who, after long shifts, were unable to deal with the queues and time-consuming practicalities of rationing. The restaurants were often housed in makeshift buildings. In an effort to make these utilitarian spaces more attractive, the Ministry of Food appointed a special art advisor, an initiative which led to artists being employed.
Adshead undertook murals in six canteens (for example Birmingham BR, Vauxhall Motors and St. Columba House, these enabled here, and other artists, to continue mural painting during the war when private work more or less vanished.
This Ministry of Food initiative had far reaching consequences. From it originated the increased popularity and appreciation of the mural as a legitimate means to enhance public spaces. This continued into the post-war period, reaching a high point with the Festival of Britain. It also validated the idea that sites for mural painting did not have to be permanent high status locations.
The use of mural decorations in wartime canteens was almost certainly inspired by the Tate Gallery's 1939 exhibition Mural Painting in Great Britain 1919-1939, and the formation of the SMP earlier that year.
The initial executive committee was made up of John Armstrong, Edward Bawden, Vanessa Bell, Duncan Grant and Gilbert Spencer. Adshead was amongst the first to apply for membership.
The above text has been taken from Modern spaces: Mary Adshead's post-war murals and the promotion of mural painting by the SMP 1939-1965, by Melanie Unwin. quoted in 'Earthly Delights, Mary Adshead 1904-1995', edited by Ann Compton and Mathew H Clough.
We are grateful to Melanie Unwin, Ann Compton and Mathew H Clough for assistance.