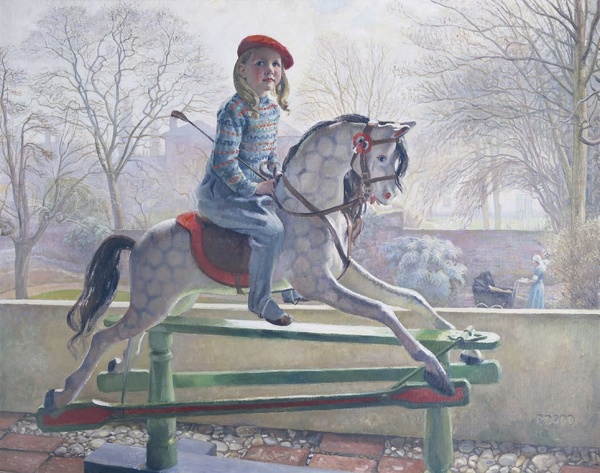 The wooden horse was found by the artist – ochreous in colour, hairless and hanging from a nail in a back yard. My mother, Phyllis Dodd, bought it and with my father (the artist Douglas Percy Bliss) transformed it into a magical mother-of-pearl, with real horsehair for mane and tail and real pony harness. On my return from kindergarten every afternoon I was encouraged to sit on it. At first I viewed this command with optimism, as a chance to rock, but a poker in the rockers prevented this until all the sittings were over.

The painting was refused by the 1938 summer RA exhibition; however, after Prudence’s jersey was brightened with a pattern, it was not only accepted but hung on the line in 1939 and reproduced in “Lilliput” with the head of George Bernard Shaw in place of her’s, under the title of “Brighter Academy Pictures”. President Munnings, an equine specialist, wrote to congratulate Francis Dodd RA, thinking he must be Phyllis Dodd’s father, especially as both painters had settled in Blackheath (which appears in the background). No relationship was ever discovered.

Phyllis Dodd maintained her maiden name when exhibiting and was indignant to find that, while she was in the kitchen, her husband couldn’t resist ‘lending a hand’ by adding to the background, which was a view from their shared studio window. The distant houses survive in Lee Park, Blackheath, but their back gardens were developed as a housing estate after the 1941 Blitz with 1950s housing, as was the Bliss’s home.

Commentary by Prudence Bliss, lecturer in Art History at the University of Newcastle between 1964–1996. She is the daughter of Phyllis Dodd and Douglas Percy Bliss.