1929         Appointed Deputy Assistant to Edward Johnston at
The Royal College of Art;
later given charge of classes in his absences.
Gave lectures, demonstrations. Undertook  responsibilities involving both
staff and students.

1928           Became Tutor in Woolwich Polytechnic School of Art under  Herbert Buckley
and Louis Prince.  Heber Matthews was Tutor in Pottery and became a friend.

1932         Made two large decorative panels from panels of embroidered work by girls in                her class at Woolwich Technical School; exhibited these at the Victoria and
Albert Museum and in Stockholm.

1934         Recommended by Professsor Hubert Worthington to execute a series of
lettered and illuminated panels on vellum constitiuting the Memorial to the
15th, 16th, 19th and 20th Battalions of the Lancashire Fusiliers (c. 2000 names)
in Sacred Trinity Church, Salford.

1941         Married the painter and muralist Charles Mahoney in Ambleside.

March 21  Birth of a daughter, Elizabeth, in Wolverhampton.
1944

1971         Panel presented to Heather Child by Society of Scribes and Illuminators.
(Wordsworth poem with Lakeland flowers).

After leaving the Royal College of Art she taught calligraphy at the Central School of Arts and Crafts and Ravensthorpe School of Art.  After ‘retirement’ at age 65 she taught  2 evening classes a week at the Stanhope Institute, Queen’s Square, London until she was in her late 70s.

Dorothy Mahoney
Oak Cottage from the back garden
£1250 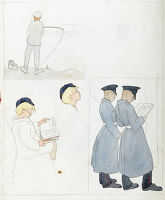 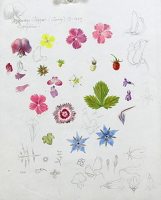 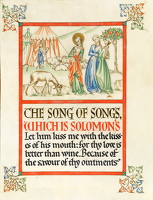